“The Far Becomes Near” is a monthly radio series on the early to contemporary radio landscapes of the United Arab Emirates, from whence they began, in Sharjah, the UAE’s northernmost Emirate. This series was made for Sharjah Art Foundation and is being broadcast on Resonance104.4fm in London and Clocktower Radio in New York.

A new four-part series (broadcast monthly within the normal Six Pillars’ weekly schedule) which archives the history of radio broadcasting in the United Arab Emirates, as radiophonic experiments punctuated by interviews with local historians, academics, cultural commentators and the federation’s earliest broadcasters.

The series creatively reimagines the documentary, each episode exploring a different narrative form, from an archive from the future to a museum audio tour guide for the blind. Sound artists Fari Bradley and Chris Weaver treat the interviews with radio practitioners of the Emirates as threads, weaving a radiophonic history as each distinct episode unfolds.

Each episode will be available later as a podcast online.

An audio archival transmission from the future. Beamed to the present day as an artifact from a future database, the United Arab Emirates’ recent history, stored by people of another millennium, is sent as a missive to the ears of today.

Commissioned by Sharjah Art Foundation, the archive is comprised of early memories as primary, secondary and tertiary sources, in the original voices and translated from Arabic, describing a Gulf at the turn of the 20th Century tuned via radio, to a world outside. 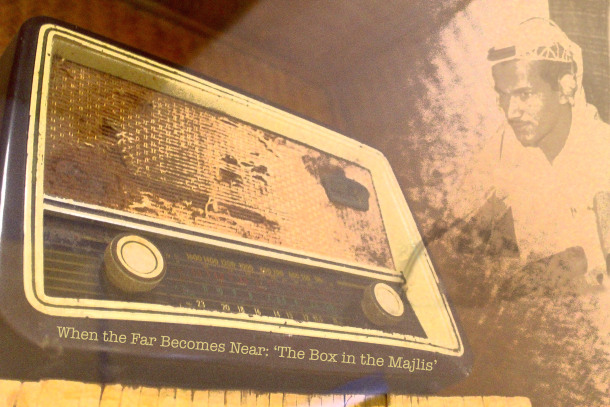 Episode 2 of the monthly series When The Far Becomes Near:

The programme takes the form of an imaginary audio tour for the blind and partially sighted, guiding museum visitors around a room in the exhibition, ‘The Box in the Majilis’. The exhibition contains objects that illustrate the changing role of radio broadcasting and reception in the United Arab Emirates between 1950-1990s.

In the UAE, listening took place at first only in the home and in cafes. At home the reception room is called the majlis, which translates literally as ‘place to sit’, and a house’s majlis was a place of learning and collective gathering, it is still a cornerstone of Emirati culture.  As much as majlis can refer to a place of social gathering and informal learning, it can denote a formal legislative assembly. ‘The Box in the Majlis’ progresses on to more portable radio sets and to car radios, which marked the beginning of commercial broadcasting and the proliferation of stations in the early 1970s.

The title for the series, and for episode 1, come from an interview with Salem Obaid who was once a junior broadcaster at Ajman’s first homegrown radio station, the earliest locally run station in the Emirates. Salem Obaid refers to a reported hadith, predicting a future “When the near becomes far, and the iron speaks.”

Episode 3 of the monthly series, “The Far Becomes Near”

Examining the social and political history of early radio in the United Arab Emirates. Today’s episode – “The Confidential Briefing”

This episode of “The Far Becomes Near” comes as a cassette tape, handed to you, a member of the British diplomatic core, as you board a chartered jumbo jet for the emirate of Sharjah in the UAE. Set in 1978, the scenario imagines that as you settle down in your seat, heed the ‘permission to smoke’ announcement, you put the headphones of your Sony Walkman on. The cassette is background information in preparation for the International Telecommunications Expo to which you are headed, taking place in Abu Dhabi. What follows is a confidential briefing, of declassified documents and expert testimonies, bringing you up to speed on political aspects of radio in the United Arab Emirates ahead of your ‘diplomatic’ work at the Expo.
Broadcast on air, on digital radio signal and online from London on Resonance104.4FM and in New York City online on Clocktower Radio. 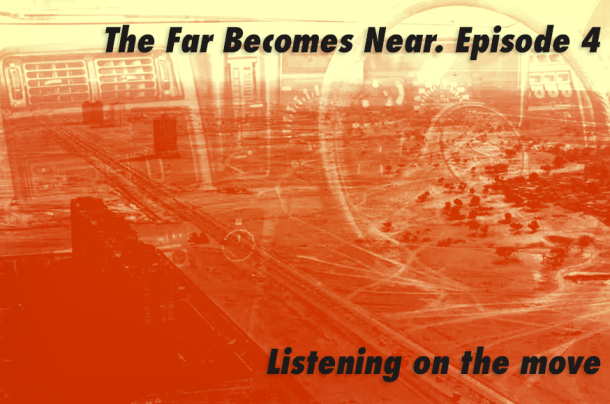 Episode 3 of the monthly series, “The Far Becomes Near”

The final episode in our The Far Becomes Near series on Sharjah in the UAE: Listening on the Move:
“The story of the rise of radio and its rapid technological changes, from Majlis to car stereo to phone app, is parallel to the story of the formation of the UAE. Radio was a centrifugal force for ideas of community and of nationality. Differences in Arabic dialect, of ethnicity and ideology, came together in the early talk shows, the on-air conversation was a crucible for those.

With that in mind how has radio listening changed until today with the proliferation of listening platforms, car radios and of streaming ‘stations’? This program examines what the past and present day listening and broadcast practices tell us about UAE’s current national and smaller community identities, through conversations with local broadcasters of different disciplines, academics and media commentators.”