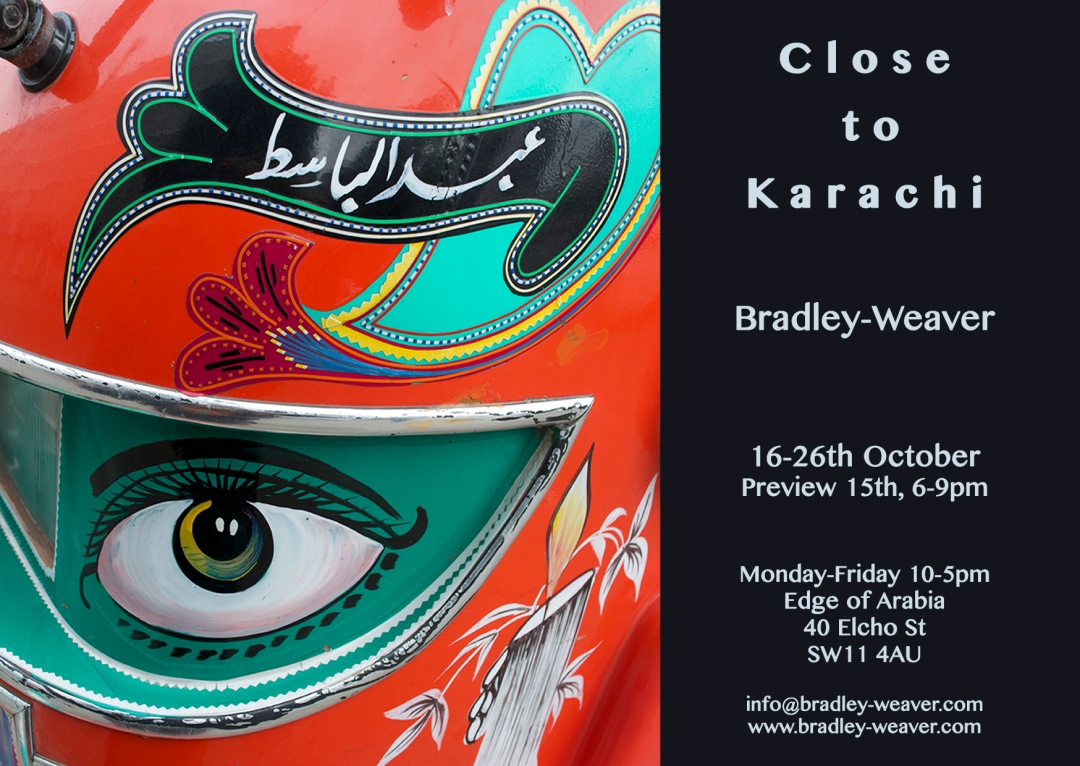 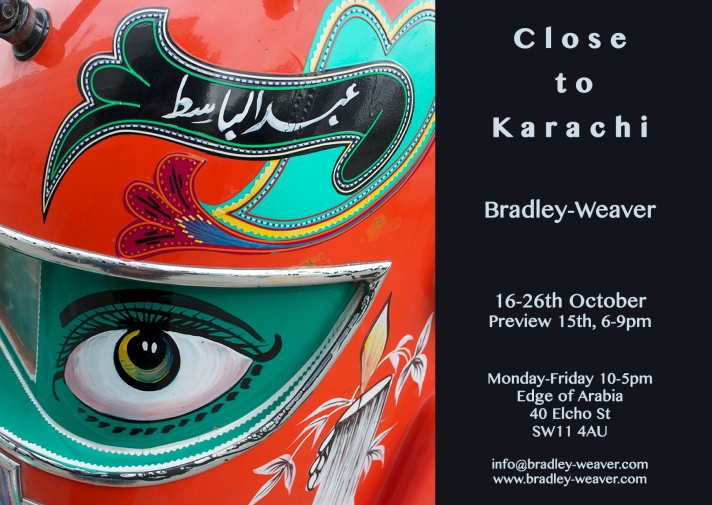 Close to Karachi – an exhibition of new work by Fari Bradley and Chris Weaver; sound, sculpture, print and found objects. The works in Close to Karachi are responses to a month’s residency in Pakistan’s only sea port, the world’s second most populous city, Karachi. 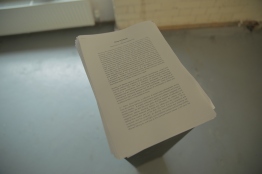 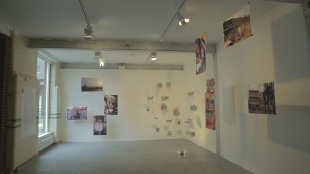 For their research the artists visited workshops making Pakistan’s distinctive truck art, and recorded the people and thoroughfares of the city. Touring lectures about their practice at three major universities, the conversation became a two-way research project – the dialogue orbiting around issues of social class (illustrated through the travel systems), the streets as locii of everyday life, and the politics of sound and silence. The works featured in this show range from photography (as a practice of creating “totems”), a sound installation responding to the materiality of the pieces and found objects that provide a dissonant postscript to Pakistan’s history of self-determination. 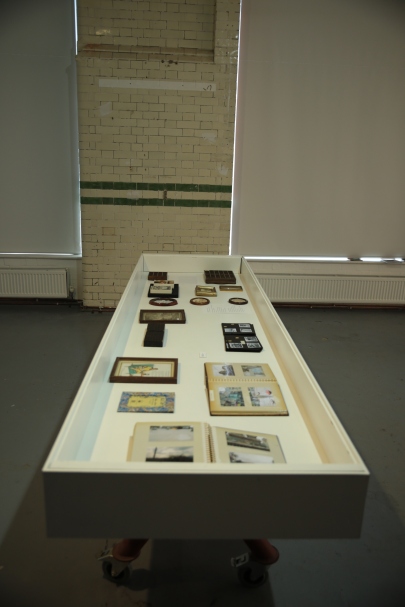 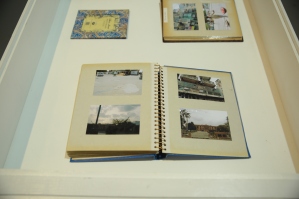 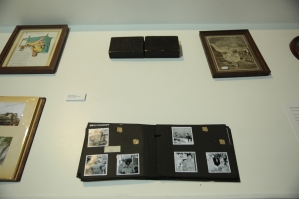 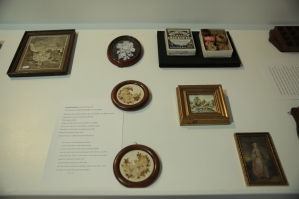 Evening Primrose seeds open when wet. This is known as ‘ballistic knowledge’, in the swelling. That which has neither wings nor tail, must travel in the belly of a bird.Seeds need a carrier, that chance element,That magic element.All parts of the Evening Primrose plant are edible, Yet in some places it is considered a scattered weed. Primrose’s true beauty is revealed only at night, When the its blooms open fully And the flower’s subtle scent perfumes the air.
By Fari Bradley, Shadow Box display (Qur’an, 2:164)

The creation of the heavens and Earth, and the alternation of the night and day, and the ships which sail the seas to people’s benefit, and the water which God sends down from the sky – by which God brings the Earth to life when it was dead, and scatters about in it creatures of every kind, and the varying direction of the winds, and the clouds subservient between heaven and Earth, there are signs for people who use their intellect.

‘Close to Karachi’ presents the city’s social spaces as a fragmentary look into a place so dense and multifaceted that it is impossible to come to know as a whole.

Once called the ‘Gateway to Pakistan’, Karachi is home to 20 million living in a tightly constricted space. Once a thriving commercial centre, the country’s only port-city now sprawls into beaches and bazaars against the backdrop of structural socio-economic chaos and architectural decay and abeyance. What would the soundtrack to such a metropolis be? With its pronounced class divisions and manifold geographical boundaries, Karachi is a patchwork and a territory ripe for anthrophonic investigation. Atmospheric moments of multi-layered sonic bustle are punctuated often by insulated, resonant single notes. In most areas, the public domain of the street is frequented only by the underprivileged; the working class and the poor, while the rest are sheltered from this sonic ensemble inside their vehicles, engaging with the world around them almost accidentally, at a traffic light or on a jam, where the world literally comes knocking on their windows, asking for help. Amongst derelict structures in Art Nouveau and Venetian Gothic style, between the mass of rubbish that threatens to engulf everything around it, who are the ones to survive these harsh conditions and how can we create a visual language to convey the full range of the city’s complexities?

This exhibition seeks to examine different converging streams in the rich tapestry of Karachi’s society. At first, there is the street-level where on the edges of thriving informal economies, the dense soundscapes tell 100s of stories at once; in order to survive the city how do inhabitants manage escape this dense background noise? The second is the tale of modernity, a mysticism embodied by the ornate trucks and buses, the very same motor vehicles that drown out the sounds of the everyday life they pass, and where children are enlisted to work and endangered. And last, there is a new invasion of artefacts, charity donations from Britain, unwanted and unsold, filling the markets of Karachi with very personal, but now broadly anonymous histories from the very country from which Pakistan claimed its independence.
__________________________________ 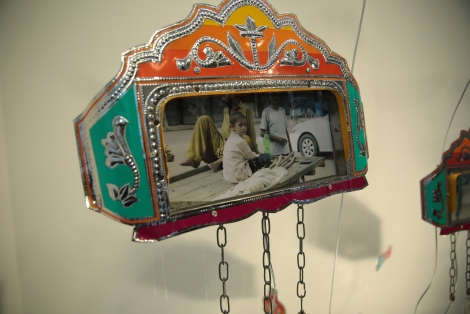 Detail ‘Ours Don’t Play in the Streets’ 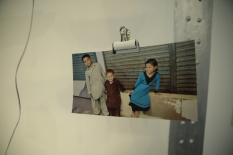 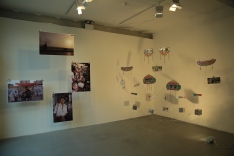 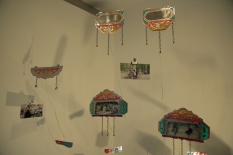 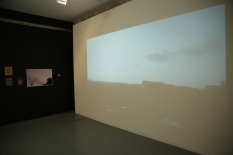 Close to Karachi is supported using public funding by the National Lottery through Arts Council England.

Known as the ‘Gateway to Pakistan’, Karachi hosts 20 million living in close proximity, making it ripe terrain for anthrophonic investigation. Once a bustling commercial hub, Pakistan’s only port city now unfolds into beaches and bazaars over a backdrop of apparent socio-economic disorder. Down its congested roads ring teams of ‘jingle trucks’ – lorries and buses with extravagantly crafted bodywork, adorned with the bells that give them their name. Visually compelling, the vehicles take this colloquial name from the trail of sound they leave on the streets. Coloured beads and bells on chains jingle and chime together strung from bumpers and windshields trimmed with hammered steel leaves, as the trucks and buses roar along city thoroughfares. The surrounding pavements, lined with covered markets, brim with trade, where Karachi’s denizens barter and rummage through the stalls daily. Parts of conversation are snatched in transit. A motorbike rattles past. Seagulls hover, shrieking above the coastline. Karachi’s soundtrack is a patchwork. These are of moments of multi-layered sonic bustle, punctuated by isolated, resonant single notes: the extended over-layering of different calls to prayer, the shriek of a roost of kites circling for food, the tiny hollow beats in a trickle of water from a pipe.

Bradley and Weaver spent a month in Karachi committing to camera and recorder audio-visual snaphots of the world’s second most populous city and its people. The result is a collection of audio-visual impressions captured in conversation, field recording, photograph and specifically sculpted truck art. Amongst the works, found artefacts bely a strange tale of international commerce between the UK and Pakistan. Close to Karachi presents the city’s social spaces as glimpses of a metropolis so dense and multifarious that it is impossible to know.

In Totem Series (2015), a collection of poster-sized photographs strung from the ceiling, typical yet distinct faces and scenes of Karachi are hung at various depths. A stretch of Karachi’s beach at sundown, peppered with bottled water alit with the sun’s glow, and the shadows of umbrellas and beachfront statues standing totemic in silhouette. An elderly man in sagging clothes fastened with knots and safety pins, the number ’18’ in fading blue marker pen on his shirt. The front of a truck lacquered with turquoise and hot pink-red: an alluring, heavy-lidded but unseeing eye peeking out over a truck light, surrounded by paisleys and burning candles. Women fishing for soft toys at the covered Karachi bazaar in the sand, the anamorphic ‘totem’ infantilised. Under market awnings, the young men of Karachi chip away at blocks of ice laid out on the pavement, its natural white blankness a horror vacui against the ostentatious clamour and colour of the streets.

In the art of the truck and bus, the symbolic and emblematic factor heavily, where the sacred (religious passages and iconography) frequently mingles with the profane (poetry, flora and fauna and the stars of popular culture). This way, trucks and totems perhaps present us with a modern, mechanical mysticism. The clannish associations of the totemic resonate with the homosocial nature of Karachi trucker life on the road; a kinship produced by exchanges between company heads, their drivers and mechanics, and the apprentices and artisans in the workshop who are behind the creation of the extravagant bodywork for these vehicles. Furthermore, the design of each truck is unique. Motifs are chosen with close attention paid to their talismanic qualities: these are symbols and signs to escort the driver with safe passage through the streets and claim his status. Choices in exterior decoration are so exact that passers-by can decipher the home region and ethnic group of whoever is behind the wheel.

The famously customised trucks of Pakistan are symptomatic of a folk art that has since become a booming industry. To brighten the shell of a Japanese HGV is not cheap – around £2,500, a hefty price where the average per capita income in Pakistan is £992. It’s a socio-economic bargain. Drivers often spend more on their trucks than their houses, as the more impressive the truck is, the more likely an offer for employment.

In Close to Karachi, vibrant slices of truck exterior in undiluted, ice-lolly hues are liberated from street-level and suspended overhead. Instead of housing a rattling engine, the sound that now emanates from behind the sheet metal is the audio installation Sounds of the Street. As recordings play, conversations with members of the Karachi public are steadily drowned out by the din of the shaking nickel.

Throughout the show the mechanics of sound permeate the static image. New Scores (2015) turns our view upwards from the rubbish-lined streets of Karachi toward the sky. Thick, black power lines undulate in stripes like the register staves of sheet music, birds darting between the cables as notes. These wires transform into a graphic score – a democratic, formalised language of music that can be read visually.

In Burnes Road Karachi (2015) a boy is flanked by another child, framed in a vibrant plate of truck art. The picture seems less innocent in context. The charming facades of Pakistan’s trucks and buses sometimes hide terrible truths. Reports are that as many as 1.5 million vulnerable street children may fall prey to widespread sexual abuse by drivers on truck and bus routes, many of whom admit their deeds as part of truck-stop subculture. Publicly it is still a taboo, currently addressed only tangentially by reluctant under-resourced authorities. This lost innocence, the failure of society to protect children, is an open secret, diffused by a culture of deep shame and fear in which responsibility is impossible to drive home, and whereby the perpetrators themselves were once victims in an unending cycle of abuse. The small nickel boxes of Ours Don’t Play in the Streets (2015) speak to this fragility of innocence and the danger that trucks pose behind each colourful exterior. These suspended metal caskets are hand worked and shimmer with imagery ordinarily decorating the bumpers of vehicles. Each one is a tiny silver Pandora’s box closed to us, but with a proud exterior.

Trade Route (2015) presents a series of found objects specifically selected from the Karachi Bazaar. They are the unlikely material debris of a new invasion of cast-offs and charity donations made in the UK. Decades after independence, British detritus is routinely washing up on Karachi shores for sale in markets that pop up in fields of dust within the city’s periphery. Second-hand goods from UK charity shops, many with the price or brand sticker still attached, are bought and sold in an absurd displacement of the sentimentality with which we imbue objects that embody our memories of childhood and family. Used family photograph albums have been appropriated, nearly all the holiday pictures and portraits removed by the salesmen to make room for new ones. Using annotations left behind by the original owners as a guide, the artists took hundreds of landscapes and portrait photographs of Karachi as a study, to repopulate the albums.

Other found objects are bucolic British countryside scenes, old lace and antique sewing kits, fading sepia pictures of ladies at leisure, framed in a Boots that has long disappeared, replaced now by the streamlined branding and design of the shop chains that render UK’s city high streets all but generic. These are objects from UK’s past. Now defunct, removed from context, they serve little purpose in our current reality. Yet they are also relics of our recent history, lost geographically and temporally, that people elsewhere will now use as their contemporary domestic wear. The trade routes of textile and spice are now open for throwaway items. In the inadvertent export of our past we are still Close to Karachi in ways that we are now oblivious to.